Our fingerprint images are available in two formats:
These images are great for teaching the fundamentals of fingerprint pattern recognition, biometric examination, minutiae extraction, classification, and identification of individuals, and they also make excellent diplay materials!

We have a huge collection of high-quality "flat vector" fingerprint images covering every conceivable pattern type. These are great for teaching the fundamentals of fingerprint pattern recognition, biometric examination, minutiae extraction, classification, and identification of individuals, and they also make excellent diplay materials!
Flat fingerprints are images of fingerprints taken by pressing the tip of a finger onto a flat surface and recording the mark that is produced. Vectored images  are produced from digitised versions of the flat fingerprints by removing all extraneous detail in the print. The result is a crisp, black image which reveals both Galton Level 1 (pattern type) and Galton Level 2 (minutiae) detail. Flat vector fingerprints are the easiest of image types to examine, and are especially suitable for schools and colleges, for those who are new to the field of fingerprint examination, or for those who simply need images without the often confusing detail present in real-world images.
Our flat vector fingerpint images are available as individual fingerprint sheets and as sets containing collections of fingerprints. There are hundreds of fingerprints to choose from, and as in the real world, we guarantee that no two of our fingerprints will ever be the the same.
LOOKING FOR SOMETHING UNIQUE?
Can't find quite what you want? Are you looking for something unique?
We can prepare bespoke, flat vector fingerprints tailored to meet your precise requirements, in any quantity and any size. And we can do it quickly! Just give us a call. 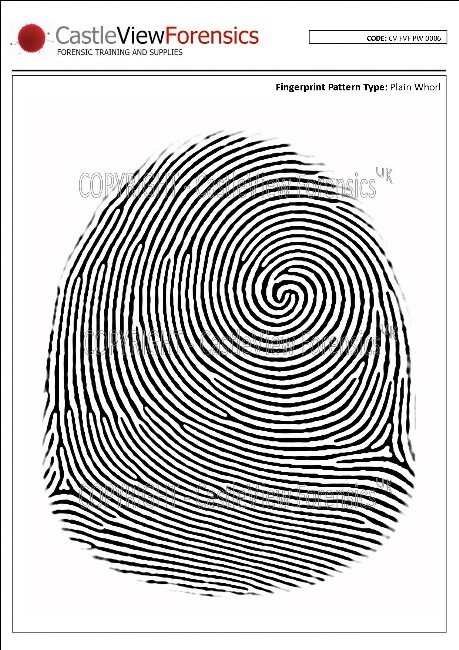 DIGITAL COPY
COMING SOON
If you prefer to print out copy yourself, you will soon be able to download digital copies of our high definition fingerprint image sheets directly from our Members' Area. WATCH THIS SPACE!

Our 10-digit fingerprint forms contain one rolled image of every finger of both the left and right hands, and flat-pressed images of the four fingers, and each  thumb of both hands. These images of fingerprints are exactly like those obtained by rolling the finger end, or pressing the flat fingers of a person onto a surface and recording the mark that is produced. The fingerprints on our forms are as realistic as they can get. They are grey-tone images which reveal Galton Level 1 (pattern type), Galton Level 2 (minutiae), and Galton Level 3 (sweat pores and ridge edge) details. The images also contain defects such as the cuts and scratches found on most adult fingerprints.
Our 10-digit fingerprint forms are available as individual sheets or as collections of sheets bundled into sets, and as in the real world, no two fingerprints on any of our forms are ever the same.
WE ARE SORRY, BUT THIS SECTION IS TEMPORARILY OFF-LINE
Classic 10-Set Form 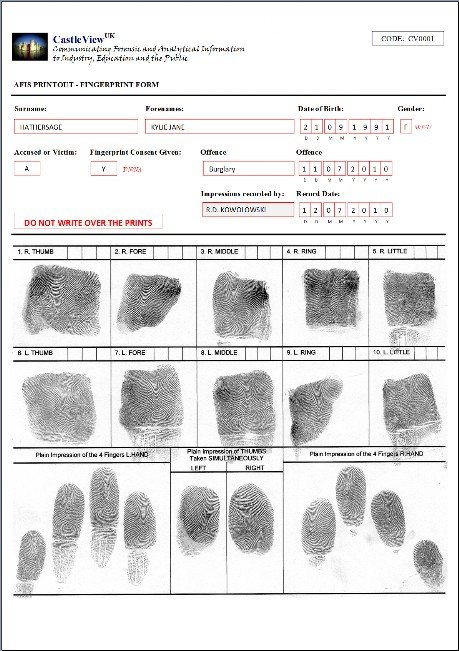